Using AI to visualise the final fight scene in Kill Bill Vol. One

Using the Dense Pose machine learning algorithm, every second of the fight scene was processed, creating estimations for the human poses throughout the sequence. The same frames were also output as they appear in the film.

Next, in Houdini, both sets of image data were then imported, and where a human pose was detected, those pixels or points were assigned to a group denoting a human form.

Trails were then constructed from all the points, suggesting flow and movement through the sequence. Using the human form grouping created earlier from the AI, the points making up those trails were made thicker to distinguish the human imagery from the rest of the scene, shown in a much more delicate shattered form.

The final result, comprising of over eight million points, reveals the different sections of the sequence — from the bloody start, to the black and white and then blue chaos of the main massacre, to the quieter garden scene, with Black Mamba finishing victorious.

In some ways I see this is a partner piece to my 2004 Cinema Redux work.

Long-listed for the 2020 Lumen Prize.

Long-listed for the 2021 Aesthetica Art Prize.

Genesis piece in the world of CryptoArt, bought by Whale Shark. 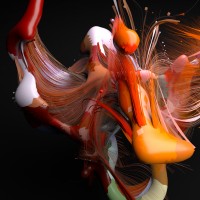 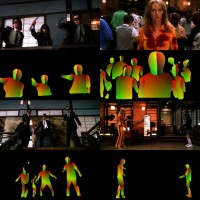