To Be Today for the RSC

A Shakespearean twist on the events of the day

Living in a World where so much seems fragile, transient and throwaway, the words of Shakespeare – hundreds of years on from when he originally wrote them – still seem as relevant today as they ever were. It was this thought, provoked by a phrase from a BBC Podcast on how Shakespeare "is a mirror or our own predicament" that inspired me to make something that would attempt to put into a real-time context the famous and not so famous phrases from Shakespeare's work.

When the RSC first got in touch with me I confessed that I'd never read any Shakespeare – my school education was more Kes than Macbeth – but they liked the fact my only experience with The Bard was through pop-culture such as the many films that have been made with his work. Over the next few months I spent all my time learning and reading about Shakespeare and why his work still permeates our culture on a daily basis.

Over time I realised that having written about every emotion, every part of society from the cruellest to the most wonderful, what if those Shakespearean phrases that we hear so much could be super-imposed on to the events of the day, giving modern context to Shakespeare and introducing new audiences to his words through the context of rolling news.

With that idea in mind I set to work on writing the algorithm that would attempt to match Shakespeare quotes with subjects in the news on a half-hourly basis. I'd never attempted anything like this before but I didn't let that worry me; I had a simple idea about matching keywords against the news story, creating a scoring system with those words and then using that to pluck out the best matched Shakespeare phrases. There were however other considerations such as not repeating the same phrase in the same day, and also being sensitive to some of the more harrowing stories that can appear; for that reason I created a black list of words so if it found them the system would just ignore that story.

As well as writing the code, I started to play with how it would look, wanting something incredibly simple, letting the words speak for themselves free from distractions or ornament. The circles were in-part inspired by the dots from Alan Fletcher's original Reuters identity; each circle representing a specific news event within the ticker tape like nature of rolling news. I wanted it to look very typographic – almost as if each one could be printed out as a "thing".

Early signs on how the system was working were promising but my knowledge of Shakespeare was sadly lacking; it needed more depth. Thankfully I then started to work with a young intern at the RSC who could offer real insight into the database that powered the system. The matches now started to really come together; here was Shakespeare describing events in real-time, showing the timeless nature of the words that he wrote and how even now – hundreds of years later – Shakespeare's work is as relevant today as it ever was. 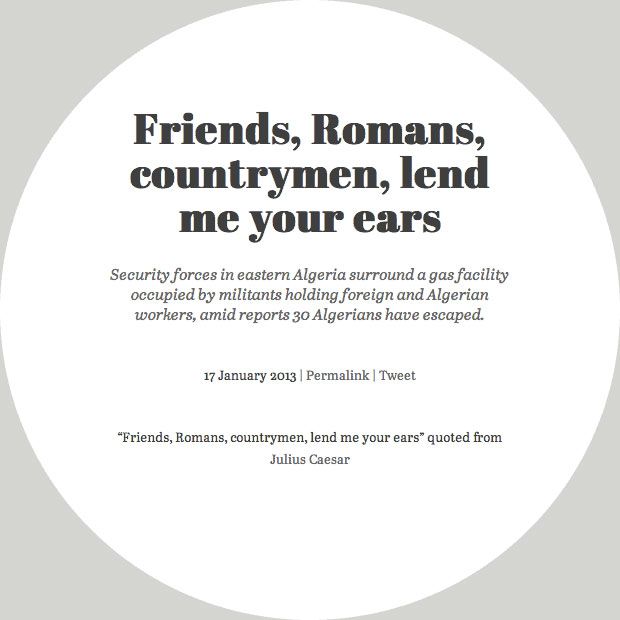 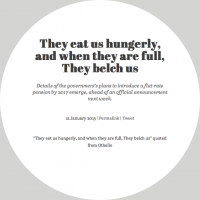 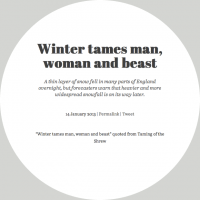